You are here: Home / About Labradoodles

The term Labradoodle was first used in 1955 to describe a crossbred dog which was created by crossing a Labrador Retriever to a Standard, Miniature or Toy Poodle.

It was not until 1988 that the Royal Guide Dogs Association in Australia (RGDAA) crossed a Standard Poodle to a Labrador Retriever that the term Labradoodle became more known. The RGDAA had been approached by a blind woman living in Hawaii whose husband suffered from allergies to dog hair and dander. She needed a guide dog whose coat would be less of an irritant to her husband’s allergies. By crossing a Standard Poodle to a Labrador Retriever the RGDAA aimed to produce a guide dog with a low shedding coat with the bidding gentleness and intelligence of the Labrador. They hoped that puppies from this mating would prove be less of an irritant to the woman’s husband and other allergy sufferers. The result was successful as one puppy from the mating did not cause an allergic reaction in the lady’s husband. The dog went on to serve the blind lady as a guide dog for ten years.

The difference between the Australian & English Labradoodle 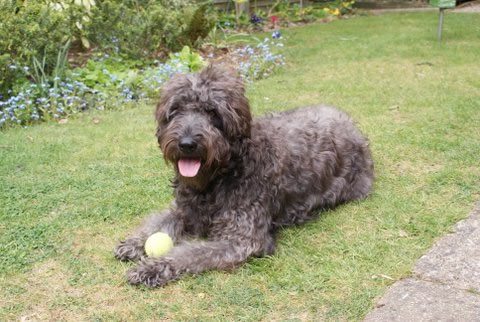 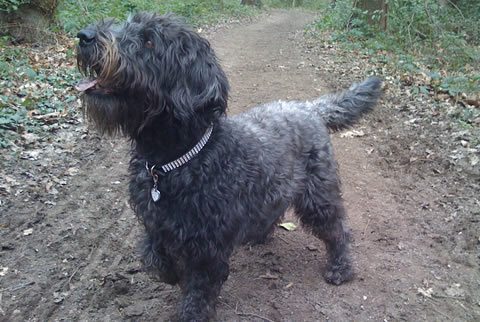 These dogs are the result of the first cross between a Labrador retriever and a Poodle.

These are known as F1’s. If those dogs are then bred to produce a litter then the puppies are known as F2’s and so on. They are a lovely dog but quite different form the A.L. Their size and look can be unpredictable as can their coat types which can vary in thickness and texture and may or may not shed. Generally speaking L.O.’s are taller and of a more slight build that the A.L.

Puppy prices vary considerably with L.O.’s in some cases you may find a quality dog for just a few hundred pounds but equally you could purchase a less desirable dog for much more. 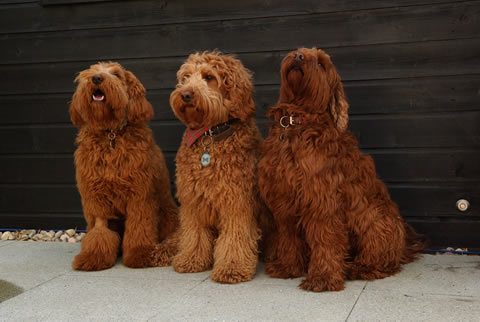 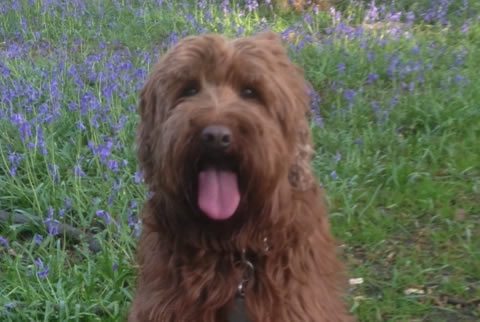 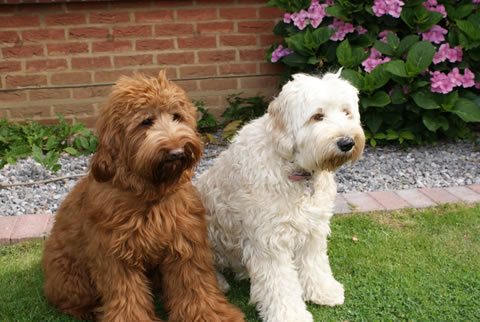 The two main breeds that make up the A.L. are once again the Labrador Retriever and the Poodle but unlike the L.O. they are NOT just a Labrador x Poodle. To ensure a more consistent non-shedding coat and to influence the size and conformation of the A.L. the genetics of other carefully selected breeds have been infused into the A.L. lines. These breeds include the Soft Coated Irish Wheaten Terrier, Cocker Spaniel and the Portuguese Water Dog . These infusions have resulted in producing the A.L. that we know and love today – a beautiful dog with a wonderful personality. The first breeders to develop these lines were Rutland Manor (R.M.) and Tegan Park (T.P.) in Australia. Since then many other breeders have gone on to develop their own lines of A.L. by selectively adding the permitted breeds above maybe for colour or size or to increase genetic diversity. However, all Australian Labradoodles will have R.M. or T.P. somewhere in their family tree.

The Australian Labradoodle has defined standards that relate to coat type and body structure. They have a unique Teddy Bear appearance. They are grouped into three sizes as follows;

Their coats can be wool or fleece or a mixture of the two and come in a variety of different colours. They do not moult and are odourless. They are popularly known as allergy friendly dogs but this can not be guaranteed many as different types of allergies exist. If you suffer from allergies then before purchasing a puppy it is important to spend time with the puppy and it’s parents to assess any possible allergic reaction.

As well as looks the temperament of the A.L. is also consistent to the breed. They are intelligent dogs that are bright, comical and friendly with no aggression. They have a keen desire to please and are therefore easy to train. They are calm dogs that make loyal and loving companions. Unlike the L.O. prices of Australian Labradoodles remain constant and do not vary much at all. With a few exceptions you really do get what you pay for in the world of Labradoodles so please do you homework before purchasing your puppy. It is important to understand that good breeders spend time and money on their dogs by choosing the best and healthiest dogs to breed from. A good breeder will give as much support and guidance in rearing your puppy and owning your Australian Labradoodle as you need.

Here at Doodle Hall I am NEVER to busy to talk about dogs!